Beware of Claims of “Cure” for Rose Rosette Disease 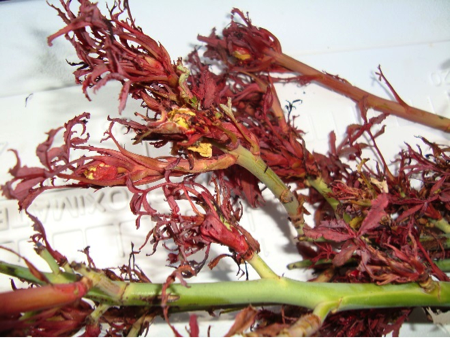 Reader be AWARE! Information is swirling through cyber-space claiming there is a “cure” for the dreaded Rose Rosette Disease. While we all wish there was a cure for this fatal disease, there are no chemical treatments that kill the virus once it becomes systemic in the plant.

Rose Rosette Disease (“RRD”) is caused by a virus which is transmitted by the mite, Phyllocoptes fructiphilus. There is currently no credible cure for plants with a confirmed RRD diagnosis. Plants infected with confirmed RRD that are left in the landscape have the ability to infect otherwise healthy roses – thereby putting the entire rose garden at risk of infection. 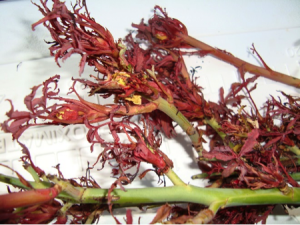 “There is an urgent need to control rose rosette disease,” said Dr. Dave Byrne, Texas A&M AgriLife Research horticulturist and holder of the Basye Chair of Rose Genetics. Because this disease has the ability to impact the U.S. domestic bare-root and container rose production with a value of about $400 million, scientists and researchers from across the country have joined together to develop a set of best-management practices to manage mite transmission of the virus as well as undertake studies to identify the sources of genetic resistance to RRD and quickly transfer resistance into roses for use by the nursery industry. The 17-member multi-disciplinary team conducting this research includes experts in plant breeding and genetics, molecular genetics, plant pathology, entomology and is collaborating with rose breeders in four states, as well as the Plant Research Institute in The Netherlands. One of the collaborators is the Houston Rose Society’s own member, Dr. David Zlesak, Associate Professor, University of Wisconsin-River Falls.

The United States Department of Agriculture through its National Institute of Food and Agriculture’s Small Crop Research Initiative has extended a $4.6 million research grant to the 17-member group headed by Dr. Byrne to fund the research effort to fight RRD.

Besides costly chemical treatments some of the suspect recommendations I have seen for RRD which give cause for concern include:

Figure 2; Production of excessive thorns is a symptom of RRD (courtesy of John Hartman, University of Kentucky, bugwood.org)

According to Dr. Zlesak, “Once RRD becomes systemic in the plant (in its blood stream), nothing sprayed on the plant is going to remove this lethal virus from the plant.”

In some instances, a plant may have sentimental value and may be precious to the gardener. In that instance, Dr. Zlesak suggests that the diseased portion of the plant may be pruned well below the infection point, taking great care to disinfect pruning equipment thoroughly with an appropriate disinfectant between cuts and certainly before cutting on a healthy plant. Gardeners taking this approach should keep a watchful eye on the plant that RRD symptoms do not recur, and take immediate action to remove the plant if evidence of RRD reappears.

When it comes to RRD, relying on unsubstantiated “cures” which have not been subjected to replication in controlled settings is like playing Russian roulette with your garden. The stakes are simply stacked against you!

AmericanHort, an association of nursery and landscape professionals has established an RRD website, http://roserosettedisease.com, which will be an outlet for the RRD Task Force’s national study and action plan. There is a wealth of good information available on this website.

Specimen samples from plants suspected of having RRD may be sent to the Texas Plant Disease Diagnostic Laboratory at Texas A&M University. Directions on how to take and submit samples, along with testing fees are available at http://plantclinic.tamu.edu.