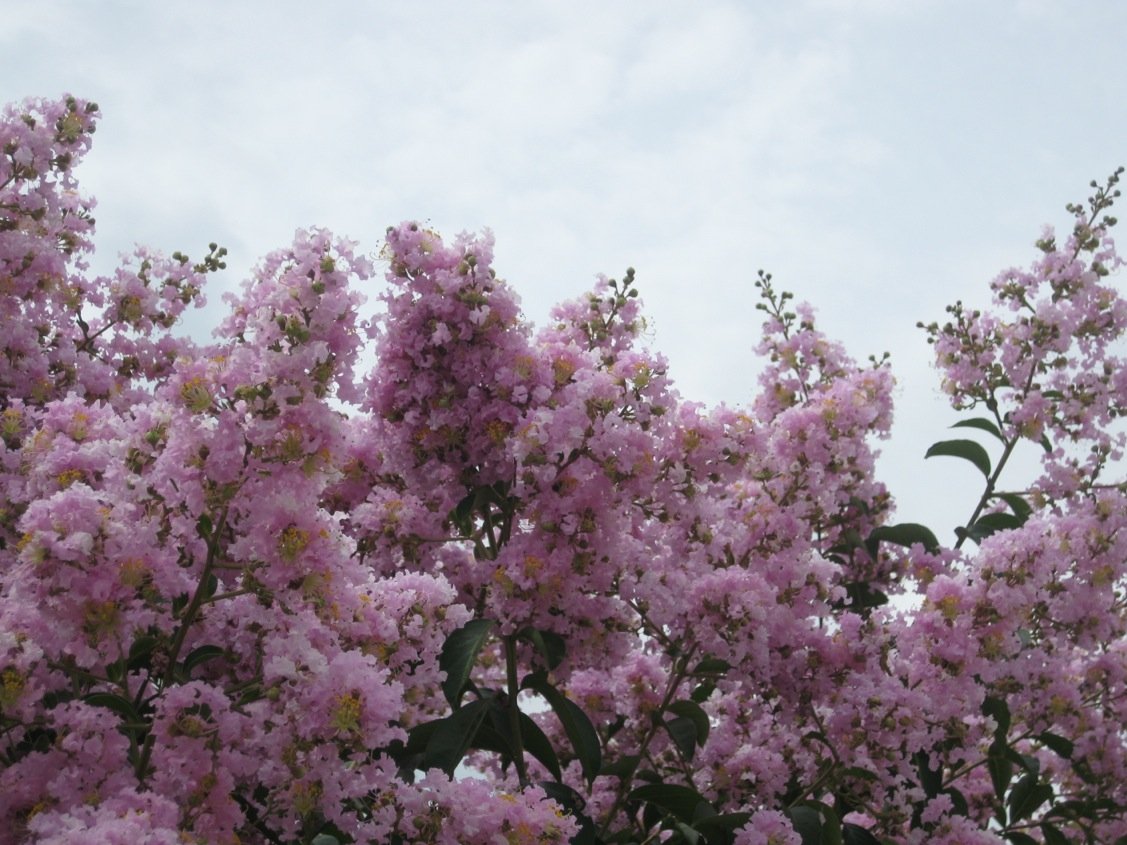 Crapemyrtles (Lagerstroemia indica )are the favorite flowering shrub of the South.  They were introduced  by seed from the East Indies as early as 1799 by George Washington.  Since that time crapemyrtles have established themselves as the premiere flowering shrub of the South.  Martha Turnbull, owner of Rosedown Plantation, St. Francisville, LA, kept a detailed diary that included obtaining and planting crapemyrtles in the 1830s and 40s.  Some of those same specimens ae alive and well today at Rosedown.  Sometimes referred as the “lilac of the South” crapemyrtles stand their own ground as the premiere shrub and small tree of the South because of their long bloom season (about 100 days) resistance to insects, disease and drought  as well as wide variety of colors and bloom size.  They are now available from dwarf sizes in 2-3′ range to medium trees in the 40-50′ category.  Colors range from white, pink, purple, red, lavender and even include bicolor flowers and maroon colored foliage.

In addition to the long flowering season crapemyrtles are known for their beautiful trunks.  Some have bark that peels throughout the growing season exposing cinnamon or gray markings.  Dr. Donald Egolf, research horticulturist at the United States National Arboretum began a breeding program in the 1960s by crossing traditional Lagerstroemia indica with L. fauriei, a vigorous species from Japan known for its colorful trunks and resistance to powdery mildew.

An early collaborator with Dr. Egolf was Lynn Lowrey, a well known nurseryman in Houston who specialized in native Texas and southern plants.  Bill M. Basham was the City Horticulturist for Houston and was given a plant of L. fauriei from Lowrey and planted it in his home garden in the Conroe area.  A seedling cross between the new fauriei and a nearby old fashion indica produced a seedling that showed great promise.   The plant was noticed in 1963, named  and introduced to the trade by Lynn Lowrey in 1965.  ‘Basham’s Party Pink’ soon became very popular and has been featured in many street plantings and home gardens in Houston and the South.

Lynn Lowrey sent this hybrid to Dr. Egolf in 1965.  Greg Grant tells us that Egolf then began his series of crosses between L. indica and L. fauriei  which resulted in dozens of named cultivars like ‘Natchez’, ‘Tuscarora’, ‘Muskogee’, and ‘Catawba’.  Mildew resistance is one of the good features of the new cultivars along with larger flower panicles.   Cultivars like ‘Natchez’ have become extremely popular because of their fast growth, handsome peeling bark and white flowers.  A negative feature is that the beautiful panicles mature into large seed pods that are last on the tree and discourage continuous flowering.  This can be remedied by removing the spent seed heads.  Since the trees can easily be 30 to 40 feet tall this may not be practical.  Fall leaf color in shades of yellow and red are another advantage of the hybrids although the indicas can also color up nicely.

Fortunately for southern gardeners, ‘Basham’s Party Pink’ has endured the test of time and competition for the “newest” varieties.  Its advantages are fast growth, free flowering, handsome trunks, soft lavender-pink coloration and modest seed set.  It also transplants easily and has good resistance to powdery mildew.   For colder climates than Hardiness Zone 8, the very similar Egolf cultivar, ‘Muscogee’ is a good choice.  Both mature into 30-40’umbrella shaped trees.   A large “bosque” (a formal, geometrical  planting) of ‘Basham’s Party Pink’ is being considered  for the new Centennial Garden at Hermann Park in Houston.    Its Houston roots will reinforce the history of gardening in Houston.