Are Lady Beetles Bugging You? 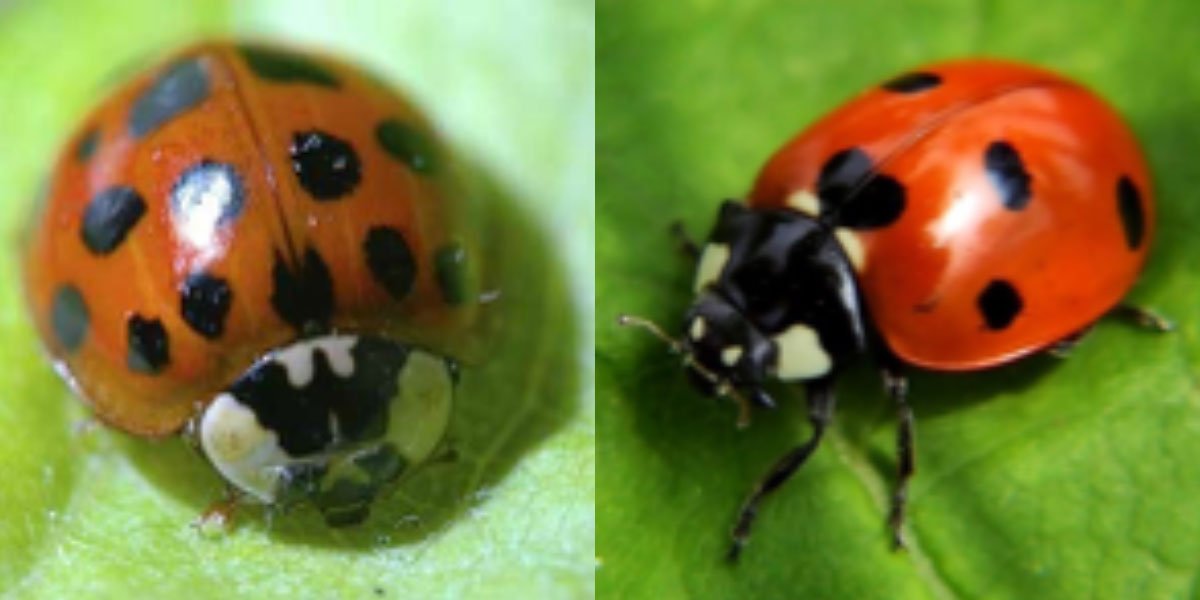 The “lady beetles” are everywhere this winter.  They are infesting houses and sheds, and in general behaving like unwelcomed house guests.

These are not our native ladybugs; these are the invasive Multi-colored Asian Lady Beetles.  The USDA actually invited them here.  From the 60’s through the 90’s, they attempted to establish them as a control for soft-bodied pests in crops like apples and pecans.

The program was considered unsuccessful since they could not find evidence of a self-sustaining population outside of their control areas.  They contend that the invasion we are now experiencing was the result of an accidental release in New Orleans from a freighter from Japan.  The first field population found in the US was in Louisiana in 1988.  But no matter how they first arrived, they have quickly spread across the US and into Canada.

The Multi-colored Asian Lady Beetle does have a different appearance than our native ladybugs.  They are larger and their color can vary from tan to orange to red.  They often have more spots, but this is not always a good identification tool since females tend to have many spots and males may have no spots to just a few spots.  One characteristic that can help with identification is that the Multi-colored Asian Lady Beetles have a white spot behind their heads that is marked with an “M” (or “W” depending on your viewing position).\ 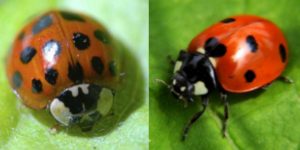 During the spring, summer, and fall, the Asian Lady Beetle has similar behavior to our native ladybug.  They inhabit croplands and gardens where they feed mainly on aphids, and occasionally mealy bugs and scale insects.  At this stage, most of us would consider them a beneficial insect.  The problem comes in late fall when they start looking for places to ride out the winter.

In their native habitat, they spend the winters in cracks and crevices in rocks and caves, so they are attracted to what looks like cracks and crevices in our homes – windows, siding, attics, shutters, and the seams around door and window trim.  They like warmth and are often drawn to the sunny south and southwest sides of a building.

The Asian Lady Beetles leave a scent trail.  So if one gets started in a favored spot, the chemical signal will attract thousands more.  The scent trail lingers for months, and can cause them to return to the same structures year after year.

As long as they stay out in our gardens, the Asian Lady Beetle does not present a problem.  But once they enter our homes, they become a nuisance.  If they are disturbed, they secrete a yellow defense chemical that has an acrid odor and can stain surfaces.

They are not known to carry diseases, but there are people who report having an allergic reaction to them, and they can trigger or exacerbate asthma.  Our native ladybug is not aggressive, but the Asian Lady Beetle can bite if they are threatened or disturbed.  It is not a sting, since there is no venom, but it can cause discomfort.

When spring comes and they become active again, they can get disoriented when leaving their winter quarters and end up inside the house.  Thankfully, they will not reproduce indoors.  But they can congregate around light fixture, window sills, and in corners.

Unfortunately, there is no quick fix for controlling the Multi-colored Asian Lady Beetle.  They like humid areas in low elevations, so our climate seems very inviting to them.  They are probably here to stay.

Light traps and ladybug houses have shown to have little to no affect in controlling the Multi-colored Asian Lady Beetle.

Our Native Ladybugs – Can you help?

Our native ladybugs are becoming quite rare.  They are being displaced by the imported ladybugs.  It has become enough of a concern that the National Science Foundation and Cornell University launched the Lost Ladybug Project in 2016.

The project asks citizen scientists to document native ladybug sightings with photographs and to report sightings to the website.  The website is full of interesting information, including tracking maps for four species.  If you click on them, you will quickly see how big a problem the Multi-colored Asian Lady Beetle has become.

They have also planned a restoration program for 2017 where participants can obtain a Ladybug Rearing & Release Kit to help restore the Native 9-Spotted Ladybug across the nation.  If you are interested in participating in either project, information can be found at http://www.lostladybug.org/

Both projects would be a great opportunity for home-schoolers and garden clubs as well as homeowners.  All pictures submitted are put on the site with a credit to the contributor.  They run on a slide show on the home page.

The Ladybug Rearing & Release Kit will include every stage from planting seeds to releasing the ladybugs.  The project will run for three years, but each kit has a cycle of about 6 weeks.

The website has a kid’s page coming, but you will find lesson plans, songs, coloring books, reading lists, and activities in the learning section of the website already.